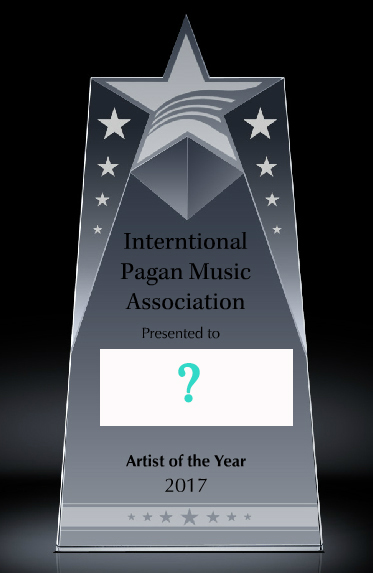 The Pagan Music Award is a 24″ lead crystal statue that has been hand crafted especially for the IPMA. It is engraved with the Award title and the name of the musician or group that has received the award. It will only be available to the winners of the award!

IPMA is very similar to American Music Awards, Country Music Awards, and Many Others and is member based.  Nominations are very simple and straightforward / They begin November of Each Year and end in January.

A Band or individual Musician must have and play music to the general public.

They must have an IPMA Artist membership. This gives them the right of Nomination and to be placed on the ballot, which then the fans select the winner by vote.

Ready to become a member now?

Should at the end of the Nomination and verification period, the Board feels that someone of merit has been overlooked, they may, by unanimous consent, select them to be included as well.

Again very simple, when Nominations are complete, A ballot is produced with all nominees (Feb or March) Members of IPMA and Fans of the Artist may vote cast their vote in each category (Male Artist, Female Artist and Group) Once Voting closes, votes are tallied, verified, and a winner is named based on highest vote in each category.

The Mama Gina Lamonte, Nine Toes the Bard Community Service Award is selected by Mama Gina Lamonte during her travels and designed to recognize outstanding individuals within the pagan community who have worked tirelessly to enhance and make better the Pagan Music Industry as well as the Pagan Community as a whole.